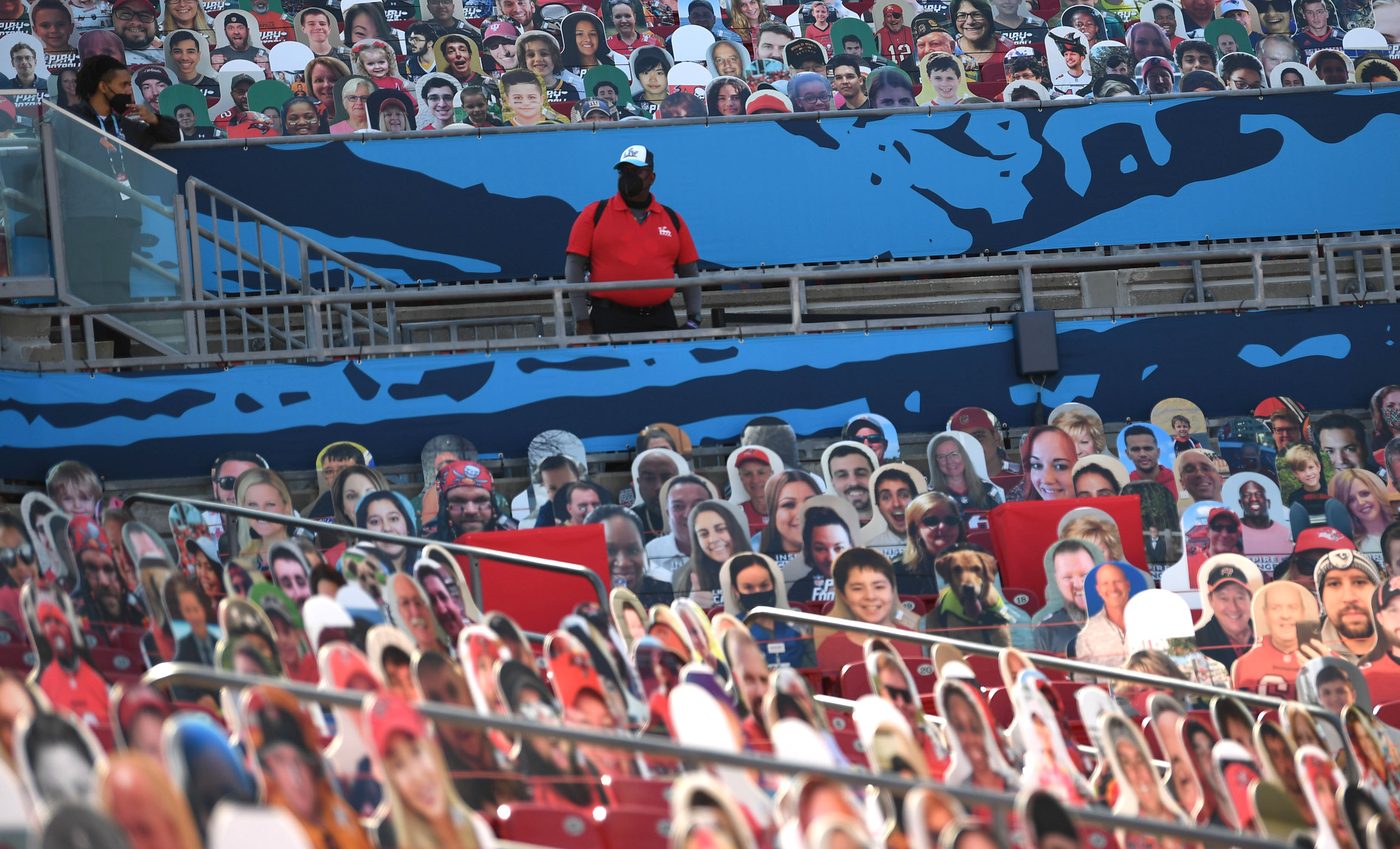 One year ago this week, all corners of the sports world were affected and forever changed by the COVID-19 pandemic.

Here is a breakdown of how the major North American sports leagues reacted to pandemic and how they worked through their respective shutdowns:

What happened immediately: Rudy Gobert of the Utah Jazz tested positive for COVID-19 on March 11, 2020, and the season was suspended minutes later by NBA commissioner Adam Silver. The shutdown lasted for more than four months.

What happened eventually: The regular season resumed on July 30 in a bubble format at Disney World with 22 teams, with the Los Angeles Lakers winning the championship over the Miami Heat on Oct. 11. The NBA draft was pushed to Nov. 18 and free agency opened two days later. The current 2020-21 season (72 games) also was rescheduled to begin on Dec. 22, with the Toronto Raptors relocating temporarily to Tampa, Fla., due to Canada’s pandemic protocols. Before the All-Star break, 31 games were postponed this season.

What’s happening next: As of Monday, 17 of the 30 NBA teams have begun or announced plans to allow a limited number of fans to attend games, with the hope that the others will soon follow in accordance with local health guidelines.

What happened immediately: Major League Baseball announced the cancellation of spring training games effective March 13, 2020. The league initially announced the start of the regular season would be pushed back by at least two weeks, but it was more than four months before the first pitch was thrown.

What happened eventually: Training camps reopened on July 1 and an abridged 60-game schedule with geographically reconfigured divisions began on July 23. No bubble format was used, and although major COVID-19 outbreaks involving the Marlins and Cardinals caused postponements, the Dodgers emerged from an expanded playoff format to defeat the Rays in the World Series played before a limited number of fans at a neutral site, Globe Life Field in Arlington, Texas.

What’s happening next: Spring training began on time in 2021 and fans will return in some capacity to most big league parks in April, including 10 percent (the maximum allowable in New York state) at Yankee Stadium (around 5,400) and Citi Field (around 4,200).

What happened immediately: The one major pro sport that wasn’t in-season at the time of the initial shutdowns, the NFL was intent on playing its full 2020 season as planned and pulled it off. Offseason OTAs were held virtually, however, and the NFL draft in April also was changed to a remote-only event.

What happened eventually: Training camps opened in late July, albeit with strict protocols in place, and the NFL delivered on its promise to start the season as planned on Sept. 10. Various games were postponed due to positive tests and breaks in protocol, but all 32 teams played the full 16-game slate, some with fans in attendance, before Tom Brady and the Buccaneers defeated the Chiefs in the Super Bowl on Feb. 7.

What’s happening next: About 22,000 fans attended the Super Bowl in Tampa, and the league is making plans to hold a live event with social distancing in place for the April 29-May 1 draft in Cleveland.

What happened immediately: One day after the NBA announced its shutdown, the NHL suspended play on March 12 due to coronavirus concerns, a stoppage that would continue for more than four months.

What happened eventually: The NHL also went with an expanded 24-team playoff format, housed in two Canadian bubbles in Toronto (Eastern Conference) and Edmonton (Western Conference, Stanley Cup Final). The Islanders reached the Eastern finals before losing to the Tampa Bay Lightning, who hoisted the Cup after defeating the Dallas Stars.

What’s happening next: The start of the 2020-21 campaign was pushed back to Jan. 13, with each team slated to play 56 games — all within their new divisions — in a geographically realigned NHL, including all seven Canada-based teams in one grouping. Like the NBA, several teams have recently or are planning to allow limited amounts of fans to resume attending games.

What happened immediately: The PGA Tour announced on March 12 the cancellation of the remainder of the Players Championship, after playing the opening round, and initially canceled all tournaments through April 5. The PGA Championship, the U.S. Open and The Masters also were postponed later that week.

What happened eventually: Eleven tournaments were scrapped before the players returned to the links on June 11 at the Charles Schwab Challenge in Fort Worth, Texas, without fans in attendance. The three aforementioned majors also were played without fans months later, beginning with the PGA Championship in August.

What’s happening next: The majors are slated to be played with limited fans as scheduled beginning with the Masters from April 8-11, followed by the PGA at Kiawah Island (S.C.) in May and the U.S. Open at Torrey Pines (Calif.) in June.

What happened immediately: On March 12, the ATP suspended all tournaments through April 20, with the French Open being pushed back four months until September and Wimbledon canceled altogether for the first time since World War II (1945).

What happened eventually: The ATP and WTA returned to the court five months later with the men in Washington, D.C., and the women in Palermo, Italy, in August. The Cincinnati Open also was rescheduled to be played at the Billie Jean National Tennis Center in New York ahead of the regularly scheduled U.S. Open, which was played without fans.

What’s happening next: The four Grand Slam events, beginning with the Australian Open last month, are slated to resume as scheduled this year.

What happened immediately: The St. John’s-Creighton game in the Big East Tournament was at halftime at MSG when the game and the remainder of the tournament were canceled. Most major conferences had made the call to cancel in the morning, and the men’s and women’s NCAA tournaments also were soon scrapped, as were the remainder of spring collegiate sports.

What happened eventually: Local schools such as Rutgers and Hofstra missed out on ending long March Madness droughts last year, but despite some dicey moments this season with COVID-19 across the country, conference tournaments are taking place ahead of a return to March Madness later this month.

What’s happening next: Beginning with the First Four on March 18, the 68-team field will begin play with all games held in Indiana, mostly in Indianapolis, with the championship game slated for April 5 at Lucas Oil Stadium.

What happened immediately: The Ivy League canceled football for the fall, as did a few independent Division I schools (including Connecticut), but conferences such as the Big 10, the Mid-American and Mountain West reversed initial plans to not play with a delayed and abridged season.

What happened eventually: More than 100 games were postponed or canceled, and Clemson star quarterback Trevor Lawrence was forced to sit out two games in November following a positive test. The Tigers lost in the national semifinals to Ohio State, before the Buckeyes — after playing only six regular-season games — lost to No. 1 Alabama (13-0) in the national title game.

What’s happening next: Football Championship Subdivision schools are playing a spring schedule, while the bigger schools will be holding spring practice, as usual.

What happened immediately: It took nearly two weeks after the athletic shutdowns began in the United States before the International Olympic Committee came to a decision on whether to postpone the 2020 Summer Olympics in Tokyo.

What happened eventually: On March 24, the IOC and the Tokyo 2020 Organizing Committee jointly announced that the Summer Games would be rescheduled to 2021.

What’s happening next: The city of Tokyo and the IOC are determined to hold the Olympics from July 23 through Aug. 8.

What happened immediately: Major League Soccer postponed all matches beginning March 14 and quickly extended the delay through at least May 10.

What happened eventually: MLS returned to the pitch in July, with a World Cup style tournament featuring all 26 teams (won by the Portland Timbers) held at Disney’s Wide World of Sports Complex in Orlando. The league then finished the interrupted spring season, with the Columbus Crew winning the MLS Cup in December.

What’s happening next: The 2021 regular season is slated to begin April 17.

What happened immediately: The WNBA announced that the 2020 season would be played beginning in July at the IMG Academy in Bradenton, Fla.

What happened eventually: Only a few players tested positive over the next few months, with the Seattle Storm defeating the Las Vegas Aces for the championship in October.

What’s happening next: The Liberty own the first-overall pick in the upcoming draft before play resumes this summer.